Overprint have been manufacturing and supplying coding & marking machines since 1973. Our commitment to supplying reliable coding machines capable of producing high quality print at a competitive price, is still the backbone of our company policy.

Back in 1973 Mr Patrick Anderson started Overprint Packaging Machines Ltd. The Company was set up in his garage and he manufactured the OP75 Rotary Hot Foil Coder designed to print onto a flowrap machine. The first order for six printers was received from Germany and since then Overprint has not looked back. Within 1 year Overprint had moved out of the garage and into its 1st factory in Amersham on the Hill.

The company set up its own design and manufacturing facility were printers such as the Mini Coder, Rapide HI, Merlin were born and raised. 20 years later Overprint had grown out of Amersham and a purpose built 20,000 sq ft factory in Aylesbury was built. Overprint moved into this facility two years later in 1995 were the company formed relationships with many overseas distributors and suppliers growing from strength to strength. However ten years later Overprint went through change and in 2005 a new managing director Mr Guy Anderson downsized the company and subcontracted out all the manufacturing and design and moved the company closer to London to a new prestigious factory set in picturesque surroundings in Harefield Middlesex.

One year later Overprint purchased there competitor Preston Printers and relocated them to the Harefield factory, Overprint are distributors for many overseas coding and marking company's making the company's product base the most versatile in the industry. The company is still family owned and prides itself on its knowledge and personal touch which is lost with its larger competitors. The future looks bright for Overprint and we thank all our customers for there continued support.

"New for 2017" Overprint has now extended its range of EIDOS digital printing Machines. Due to the high demand we can now supply a comprehensive range of automated and semi- automatic systems. For advanced, high performance, in line labellers through to simple reliable applicators for integration or existing equipment. What ever your needs I am sure we can help. Please call for more information. 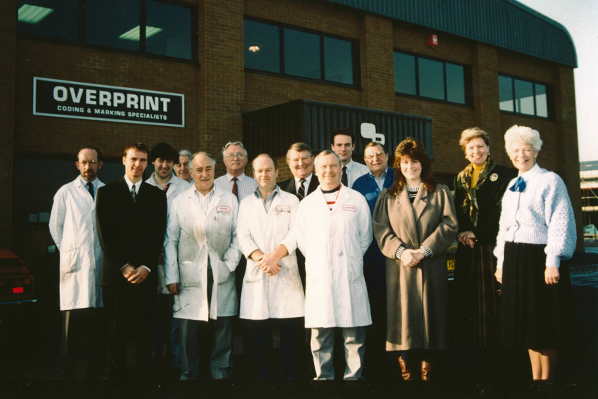